Reitnouer Trailers, currently based in Cumru Township, is the largest manufacturer of aluminum flatbed trailers in North America, according to owner/founder/CEO Bud Reitnouer, and they can’t keep up with demand.

“We’re definitely one of the better kept secrets in Berks, maybe,” Reitnouer said. “In the U.S. and Canada, we sell more than anybody in the flatbeds.”

The company has plans approved for a new 450,000-square-foot manufacturing facility and 18,000 square feet of office space along Route 61 in Ontelaunee Township.

Those plans are on hold because of skyrocketing construction costs.

“We’ve been waiting for approvals, but the big delay has been over the last year, year and a half, the building has gone up 25-30%, which in this case equates to about $10 million,” Reitnouer said.

“So, we’re kind of on a hold for the building right now,” he said. “Not only the cost thing, the supply chain. Nobody can even tell you when they could get roofing material and other materials. You don’t want to get into a big multimillion-dollar project and say, ‘Oh it’s going to be another six months until they do this or do that.’ ”

Reitnouer said the initial cost estimate for construction two years ago was $25 million. When they put the project out to bid, the price came in at $27 million.

“We looked at some ways to take $2 million out without changing any of its functionality,” Reitnouer said.

When the project was rebid with those changes, it came back at $32 million.

He discussed the situation with his lenders, and they agreed to lengthen the repayment time so the company’s cash flow would have stayed relatively the same.

He said they wanted to get the project in at $30 million, and when they rebid it the last time, it came in at $37 million.

“Currently we estimated it would be $40 (million),” Reitnouer said. “That’s just the building. It’s not land.”

The company purchased nearly 68 acres in Ontelaunee Township on March 20, 2021, from the Greater Berks Development Fund, according to county deed records.

“It’s an industrial building, so it takes a lot more infrastructure than just a warehouse,” Reitnouer said. “We need a lot more power. We need a lot more air. It’s manufacturing as opposed to warehousing, which just have lights and racks.”

Those infrastructure costs keep rising as well. He said the electric installation cost went up $1 million due to the price of the copper in the wires.

“It’s definitely on hold,” Reitnouer said. “Like I said, we’re going to do some preliminary work as we’re getting our approvals. When things settle down, we’re ready to go.”

He said they will get the project done within the next two years and will be rebidding it in the fall or winter.

“I have a two-year window,” Reitnouer said. “We really need it. We really need to do it, unless, you know, the economy really tanks.

“A normal recession is OK. In fact, ideally you would like to build a building in a recession so that, by the time, because it’s a year, year and a half project, by the time it gets completed, you’re coming out of the recession, you’re ready to go.”

The Cumru facility at 5 East Point Drive has about 130,000 square feet of space, and the company leases an additional 125,000 square feet just off Tuckerton Road in Muhlenberg Township.

A new facility would allow Reitnouer to consolidate into one manufacturing site with an assembly line capable of handling the 53-foot trailers the company makes.

“Our market share is growing and we just can’t meet the needs at our current facilities,” Reitnouer said. 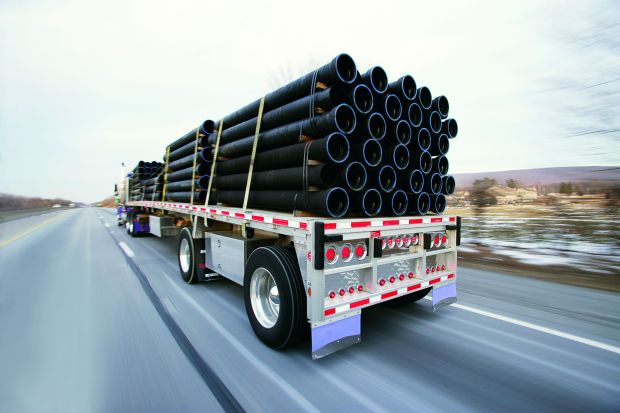 A Reitnouer flatbed trailer being used to haul pipes. (Courtesy of Reitnouer Trailers) 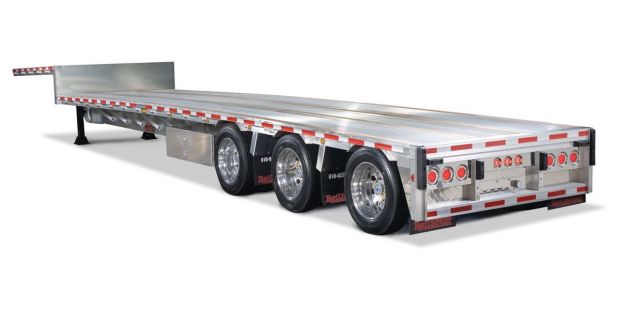 The Reitnouer Trailers facility is one of three major projects that have a green light on the Route 61 corridor in Ontelaunee Township, just south of Leesport.

Crow Holdings is in the midst of constructing a 652,080-square-foot warehouse on about 60 acres. It is expected to be completed Jan. 1.

Crownstone Equipment of Hanover, York County, is building a Bobcat of Reading dealership on 14-acres next to Rutter’s. Company officials said they hope to have the 12,000-square-foot building open in January.

“They’re going to put up a medical facility that will have doctor’s offices, therapy and can handle urgent care and so forth,” Hadden said.

No patients would be staying at the facility overnight, he said.

Hadden said Reitnouer was the only one of the three projects currently approved that successfully received a Local Economic Revitalization Tax Assistance, or LERTA. Their approved tax abatement plan would be for seven years, starting when project has been completed and the property is assessed.

Approved commercial development along Route 61 in Ontelaunee Township. Reitnouer Trailers has not broken ground yet. The Bobcat dealership and Crow Holdings warehouse are expected to be completed in January 2023. (COREY MCCARTY — READINGEAGLE)

Upland Square shopping center to be sold for $85.7 million