In Trinidad and Tobago, two Chinese companies will establish operations at e TecK’s Phoenix Park Industrial Estate (PPIE), as construction of the facility nears completion. After months of working with InvesTT and the estate’s contractor Beijing Construction Engineering Group (BCEG), Summit Luggage Co., Ltd. and Docare Quanzhou Hygienic Product Company Ltd. committed to locate at PPIE at the end of May.

InvesTT and BCEG are working collaboratively with the Embassy of the Republic of Trinidad and Tobago in Beijing to attract Chinese companies to establish operations at PPIE, the first project in the Caribbean to be implemented under the Belt and Road Initiative (BRI). BRI is a transcontinental long-term policy and investment program which aims at infrastructure development and acceleration of the economic integration of countries along the route of the historic Silk Road.

“It’s a significant milestone for the team as we began promoting the Estate in September 2020 and have been working assiduously since then, barring the obstacles posed by the Covid-19 pandemic,” said InvesTT President Sekou Alleyne. “Both of these companies are large light industrial manufacturers which, when combined, have the potential to contribute to national economic growth by way of an estimated 220 local jobs and a total investment value of TT$90M. We are currently in negotiations with 2 more companies led by Chinese nationals in our foreign investment pipeline.”

Founded in 2001, Summit Luggage has over 20 years of bag manufacturing experience. It began with a small-scale factory and now it stands as one of the largest and leading luggage producers in China, with more than 1,200 employees. Up to 3 million luggage items and bags are produced in its 90,000-square-meter plant every year and sold to more than 80 countries around the world.

DoCare is a disposable hygiene care products manufacturer and supplier in China. It offers baby diapers, pull-ups, and wet wipes which are exported to over 120 countries and regions.

The companies opted for the PPIE after considering other industrial parks in Southeast Asia and Latin America. They cited the following factors which influenced their decision to locate in Trinidad and Tobago:

Ideal location: Trinidad and Tobago is closer to their specific consumer markets, more conducive to the expansion of business in the Americas and responds faster to market demand.
Low operational costs: Trinidad and Tobago has the lowest electricity and natural gas cost in the region, giving tenants lower operational costs.
Attractive incentives: The companies will be eligible to apply for fiscal and non-fiscal Government incentives, with the added attraction of accessing Special Economic Zone (SEZ) incentives upon full proclamation of the SEZ Act.
Governmental support: The construction and development of the Estate has been supported and facilitated greatly by the governments of both countries (Trinidad and Tobago and the People’s Republic of China) at different levels, including state leaders, relevant ministries, agencies and associations and officers.

In addition to these two projects, three local companies including Ramps Logistics and Global Tobacco will also be expanding their operations to PPIE. In December 2021, anchor tenant PriceSmart International announced plans to invest nearly $8 million at PPIE. 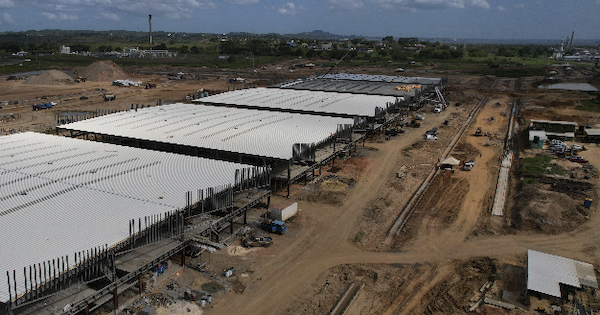 Situated on 538,000 square meters in Point Lisas and financed by the Export-Import Bank of China, PPIE includes five factory shells of 5,000 square meters each. It plays an important role in the country’s economic development and diversification efforts as it targets firms in the areas of high-value and light manufacturing. According to BCEG, construction of the PPIE is slated to be completed towards early August 2022.

Considering the Caribbean for your company’s relocation or expansion project? Check out all the latest news related to economic development, corporate relocation, corporate expansion and site selection.

Why Agile Operations Are Now More Vital Than Ever