By Nora Caley
From the September/October 2022 Issue

Tiny semiconductors have an outsized effect on global commerce. The foundation in almost every sector of electronics, semiconductors enable people to work remotely, order online, and turn on their coffeemaker. As an increasing number of gadgets go high-tech and consumers continue to opt for digital connections, semiconductors are more important than ever.

According to the Semiconductor Industry Association (SIA), global semiconductor industry sales were $49 billion in July 2022, an increase of 7.3% over the July 2021 total of $45.7 billion, but a decrease of 2.3% compared to June 2022 ($50.2 billion). One challenge is the global shortage in semiconductors, a result of a variety of factors, including unanticipated rising demand for chips during the COVID-19 crisis and fluctuations in demand for chips in products such as cars.

Also according to the SIA, the share of global semiconductor manufacturing capacity in the U.S. has decreased from 37% in 1990 to 12% in 2022. The decline in U.S. chip manufacturing is largely due to subsidies that governments in other countries offer to global competitors. The U.S. federal investment in semiconductor research has been flat, while other governments have invested substantially in research initiatives to strengthen semiconductor capabilities.

That will soon change, with President Biden having signed the CHIPS and Science Act of 2022 in August. The bill, also known as the Creating Helpful Incentives to Produce Semiconductors for America Act (or CHIPS Act), provides $52.7 billion for semiconductor research, development, manufacturing, and workforce development. As a result, companies announced $50 billion in additional investment in American semiconductor manufacturing, according to a recent White House Fact Sheet.

Cities and counties are investing in semiconductor manufacturing, and positioning themselves as ideal regions for building this business. Here are some of the regions that are successfully attracting semiconductor companies.

The American semiconductor industry is experiencing a renaissance. Supply chain crunches and heightened interest from policymakers have catapulted the all-important microchips into the public spotlight.

Amidst this revival, no state is experiencing more investment or activity than sunny Arizona. Over the last two years, between expansions of existing operations and greenfield announcements, the state of Arizona has led the nation in chip manufacturing investment. 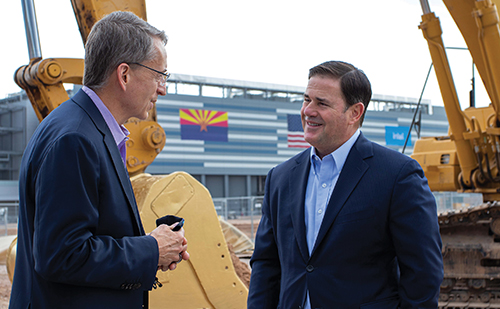 The largest of these is Intel’s $20 billion investment to build two new fabs at its campus in Chandler, AZ, hiring 3,000 workers. Construction crews broke ground on the fabs in September with the goal of their being fully operational in 2024.

Approximately 50 miles to the northwest, Taiwan Semiconductor Manufacturing Company (TSMC) recently held a “topping out” ceremony to celebrate placing the last beam on its Fab 21 in Phoenix. The $12 billion facility will support 2,000 jobs and feature the company’s 5-nanometer technology, making it the site of TSMC’s most advanced chip technology in the U.S.