In what will be the largest foreign direct investment in Ohio, SEMCORP Advanced Materials Group will invest $916 million to establish a 850,000-square-foot manufacturing facility in Sidney, OH. The project will create nearly 1,200 jobs with $73 million in annual payroll. The facility will make separator film, a key component in batteries for electric vehicles (EVs). SEMCORP’s products will be used by leading EV battery makers across North America.

“The Sidney facility is one of the biggest investments in our company’s history because we know the United States is strongly committed to building the supply chains for EVs and energy storage here at home,” said Paul Lee, SEMCORP’s Co-Founder, Chairman and CEO. “Our Sidney site will be America’s largest manufacturer of separator film for EV batteries. We look forward to working hand-in-hand with state and local leaders to make the large-scale domestic production of this component a reality.” 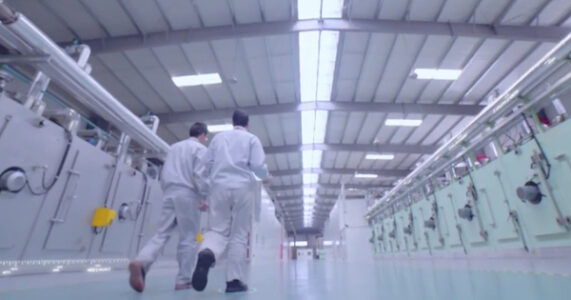 “SEMCORP chose the Sidney location because of the state’s impressive commitment to vocational education, preparedness for a large-scale project like ours, the strong work ethic in the region, and proximity to key customers,” explained James Shih, SEMCORP’s Group Vice President of Global Projects. “We’re thrilled to call Sidney home, and we’re going to do all that we can to earn the trust of the local community.”

No batteries will be made by SEMCORP, and there is no lithium used in the manufacturing process for separator film. There will be no lithium mining at the site as there are no lithium deposits in or near Ohio. In addition to EVs, lithium-ion batteries safely power a wide range of consumer products such as cell phones and computers. SEMCORP is committed to operating the facility in compliance with all relevant environmental and safety standards, according to Shih.

SEMCORP is currently the largest lithium-ion battery separator film producer in the world with five billion square meters in annual base film production capacity across six manufacturing facilities. The company plans to add an additional eight billion square meters in capacity within the next four years, including the Sidney site, with the primary objective of serving the booming EV market.

“SEMCORP’s advanced battery separator film will help propel Ohio to the forefront of the electric vehicle industry,” said J.P. Nauseef, JobsOhio president and CEO. “Our team of professionals, including the Dayton Development Coalition, the Sidney-Shelby Economic Partnership, the City of Sidney and Shelby County, worked tirelessly to demonstrate why Ohio is the best location for this investment.”

The facility will be located at Sidney Ohio Industrial Park at Millcreek and Kuther Road, a site authenticated by JobsOhio’s SiteOhio program in 2021. The site has been flagged for major industrial development since 2016. The authenticated site status ensures the site is free of any detriments that may slow or stop development.

“We’re thrilled to welcome SEMCORP to the Dayton region. Their decision to manufacture in Sidney advances Ohio’s efforts to develop a robust ecosystem for electric vehicles,” said Dayton Development Coalition President and CEO Jeff Hoagland. “The fast-growing market for electric automobiles and aircraft represents an incredible opportunity for the Dayton region to remain competitive in the changing manufacturing economy and provide opportunities for our skilled manufacturing workforce.”

Check out all the latest news related to economic development, corporate relocation, corporate expansion and site selection in the aviation and aerospace industry.