David Bazzel, former team captain for the Razorbacks, reminded the room that this is year 18 for the Little Rock Touchdown Club.

“It’s hard to believe this is year No. 18. Because of your support, I think we have one of the best touchdown clubs in America,” Bazzel said. “It takes all of us, everyone together, to make this possible. We are the only touchdown club in America that does 15 weeks of straight speakers with a banquet at the end of the year.”

This morning, the Razorbacks held its ninth practice of the year. According to Pittman, they are focused on practicing at three times: 11 a.m., 2 p.m. and at night – because they are trying to prepare for playing at various game times.

“We are really trying to take care of the anxiety our players may be feeling. Anxiety makes you tired and so we have to get that anxiety out,” Pittman said. “We’re focusing on taking the ‘I hope’ out of the equation and focusing on the ‘I know.’ The chances are if you’re in the ‘I hope’ category of things, you probably aren’t in the ‘I’m prepared.’”

The NCAA gives teams 29 days to have 25 practices in preparation for the season, and although this year, the NCAA allotted more time to prepare, Pittman says that they opted to continue with the 29 days to hold 25 practices. 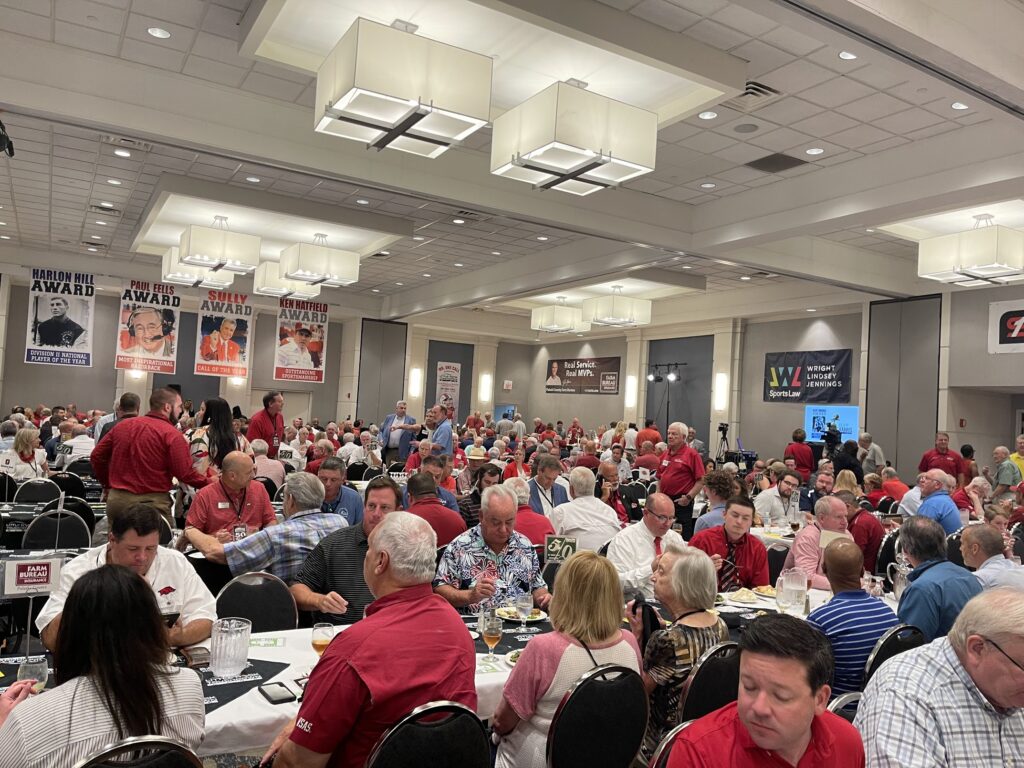 “It’s been so important that there is stability in the university’s head coach. We are selling stability: We are loyal to you and we want to be here,” Pittman said. “I appreciate that the university keeps coaches for us. There’s a lot of people out there that want our coaches and luckily we’ve been able to keep them.”

Pittman explained that the program has been able to keep everyone they want to in coaching. The program has kept all three of its coordinators and its strength coach.

“We all want to be here. We put pen to paper to say that and it has helped us in recruiting. Stability is the No. 1 thing that kids look for. That, and NIL” Pittman said.

Last year, the program graduated 100% of its seniors, which according to Pittman, is something they’ve done every year. Last year, Razorback football got the most wins that they had seen since 2011, winning The Boot in the game against LSU, the Southwest Classic against Texas A&M, the Battle Line against Missouri and the Outback Bowl against Penn State.

Pittman spoke of his belief in celebrating wins, explaining how to keep a team motivated in reaching goals.

“I can’t tell you what to do, but if you have set a goal and you reach that goal, you need to celebrate it. Have a hell of a time with it,” Pittman said. “We wanted the Southwest Classic, and we had talked about it as a team. Some coaches don’t talk about it but I say ‘why not? It’s a big deal.’”

Pittman explained that this year’s team is strong, with three super seniors coming back for another season and nine guys coming out of the transfer portal on scholarship.

“We’ve got a good football team. We really do,” Pittman said.