The number of companies using ADFI has reached 50 in about 5 months after its beta version was released.

AI Robotics Ltd., which provides the AI cloud service “ADFI” worldwide, announces on July 11 that the number of companies using ADFI has reached 50 in about 5 months after its beta version was released.

In addition, AI Robotics Ltd. has decided to continue to provide ADFI functions related to the development and performance verification of image anomaly detection AI for free even after the transition from the beta version to the GA version next month.

This service is useful for system development mainly for the manufacturing industry, such as image inspection systems.

Anyone can easily create a high-performance anomaly detection AI model without any AI expertise and without coding by just operating on the browser. The created AI model can be used at any time via the API and can be easily incorporated into the user’s existing system or product.

Also, ADFI charges are API pay-as-you-go. Therefore, the development and performance verification of anomaly detection AI is free. After incorporating it into the user’s existing system, a fee will be charged according to the number of times the API is used.

ADFI can create a high-performance anomaly detection AI model with only a small number of training images by using the pseudo-anomaly image automatic generation method which is an original technology of AI Robotics.

It is possible to create an anomaly detection AI model even in cases where it is difficult to prepare a large number of anomaly images in advance, such as a visual inspection in a factory. 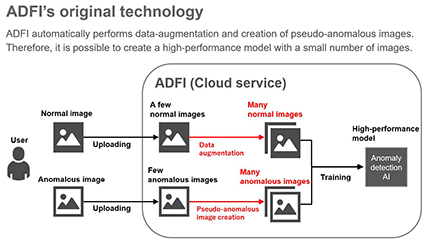 For details on ADFI services and trials, please see the official website at the following URL https://adfi.jp.