By the BF Staff
From the October 2022 Issue

Business Facilities: Please tell us about New Jersey and what the state offers to business for success.

Wesley Mathews: Set along the Atlantic Ocean and home to the famed Jersey Shore, we are in the heart of the country’s most important economic corridor, with unrivaled infrastructure to support commerce, and one of the most diverse, educated, and skilled workforces in the nation.

New Jersey’s dense network of highways and rails connect us to nearly 60 million consumers within a 250-mile radius. We are home to one of the busiest international airports with unrivaled international nonstop destinations and have the busiest maritime port on the East coast, the highest railroad density in the United States, thousands of miles of highways, and state-of-the-art facilities.

We’re also the best place to live and raise a family, with the country’s top public school system, several of the best universities in the world, beaches and mountains aplenty, and small towns and cities with vibrant arts, sports, entertainment, and food scenes.

We don’t just talk about values like opportunity, prosperity, and liberty—we lead with them, with some of the strongest laws in the country to protect women’s reproductive health, LGBTQ+ rights, and paid family leave.

Foreign companies looking to expand operations to the United States will find everything their company needs—as well as everything their family needs—to thrive here. New Jersey consistently ranks at the top for attracting foreign direct investment.

BF: What are recent notable relocation or expansion projects in New Jersey?

WM: This summer, HAX, the hard-tech accelerator run by SOSV, one of the most active venture capital firms in the world, opened its U.S. headquarters in Newark. The company, known around the world for its ability to create real-world prototypes for hard-tech startups, helps their incubator startups with an initial $250,000 investment and an intensive process to quickly bring products to market. Additional program benefits include six months of hands-on collaboration, and access to a global founder community for early-stage, hard-tech founders.

HAX’s presence in New Jersey’s largest city is an active symbol of the state’s innovation economy. The company has pledged to support the greater Newark community and has already partnered with New Jersey Institute of Technology (NJIT) to open lab space for startups. HAX has also committed to creating an internship program with NJIT (two startups have already received interns from this program). It’s expected that companies graduating from the HAX program will create at least 2,500 new, high-paying jobs in the decade ahead as well as attract millions in new capital. 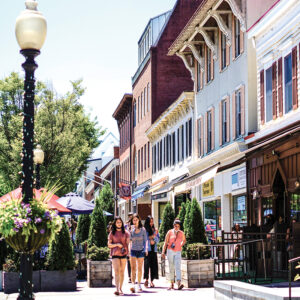 In 2021, global fintech company Fiserv expanded its footprint in New Jersey bringing 3,000 jobs to its Berkeley Heights location, making the site a “flagship strategic technology hub,” advancing the fintech industry and developing leading technologies. Fiserv was approved to receive Emerge Program tax credits by the New Jersey Economic Development Authority (NJEDA). Fiserv indicated that New Jersey’s diverse and highly skilled talent pool is one of the primary reasons it considered locating in the state. The company noted that New Jersey’s location at the heart of the Northeast corridor and proximity to New York’s financial industry were other attractive factors.

Biopharmaceutical giant, s, intends to open an East Coast hub in Parsippany by first quarter of 2023, expecting to bring about 500 jobs to the new location. They too noted that the New Jersey talent pool and location were major factors in choosing the location of the new hub.

BF: Please highlight a program that’s having an impact for business.

WM: Choose New Jersey works with the NJEDA to offer a large portfolio of varied programs and services designed to assist businesses of all sizes. These programs provide access to capital in a variety of forms including tax-exempt and taxable bond financing, loans, loan guarantees, and business tax incentives.

Panel discussion focuses on transportation issues in Chesco and Pa.

New brewhouse opens in the heart of Parkesburg