After two years of pandemic havoc, people tired of being cooped up are ready to travel.

The state’s two largest airports, located in Little Rock and Bentonville, are reporting major progress towards recovering the amount of passenger traffic seen before anyone had ever heard of COVID-19.

The number of passengers at the Bill and Hillary Clinton National Airport in Little Rock dropped by 93 percent at the onset of the pandemic. The airport rebounded to nearly 100 percent of pre-pandemic levels during the summer of 2021.

“Following the latest variant, we dropped to 80 percent, but expect a strong spring,” said Clinton National Airport Executive Director Bryan Malinowski. “Leisure travel is predominately why passengers use our airport. Pre-COVID, leisure travel made up about 70 percent of our passenger mix, and we believe that number is even higher today.”

Leisure travel has made a big return nationally as evidenced by Transportation Safety Administration (TSA) reports of travel reaching pre-pandemic levels at certain times. What continues to lag is the return of business travelers.

“In a recent earnings call, one airline reported leisure travel at 100 percent of pre-pandemic levels but business travel at 50 percent,” Malinowski said. “As mask mandates and remote working decline, business travel should pick up. Industrywide, overall, June 2022 domestic capacity is 2 percent below June 2019 levels with ultra-low-cost and low-cost carriers being above and some legacy carriers below. Airlines adjust their schedules based on demand. As business travel returns, scheduled service should increase.”

Fuel prices, however, have become an increasing concern. Malinowski said they’re already seeing some airlines, particularly ultra-low-cost carriers, adjusting future schedules based on spikes in fuel prices. There also remain concerns about the ongoing pilot shortage and its impact to small hub airports.

The new parking deck at XNA in Bentonville.
(Photo by Keith Branch)

Enplanements at the Northwest Arkansas National Airport (XNA) in Bentonville are on the road to recovery. February numbers show just under 100,000 total passengers, which would have been exceeded if not for the several snowstorms that interrupted travel to/from airports across the country, said XNA Public Affairs Manager Alex English.

“With more and more passengers feeling comfortable enough to travel again, we are confident that XNA’s passenger volume will continue to trend upwards to pre-pandemic levels,” English said. “At the very beginning of the pandemic, XNA experienced a 95 percent reduction in passengers, a historic hit to the aviation industry. Over the next year in 2020, XNA’s traffic decreased by 60 to 90 percent compared to pre-pandemic numbers in 2019. 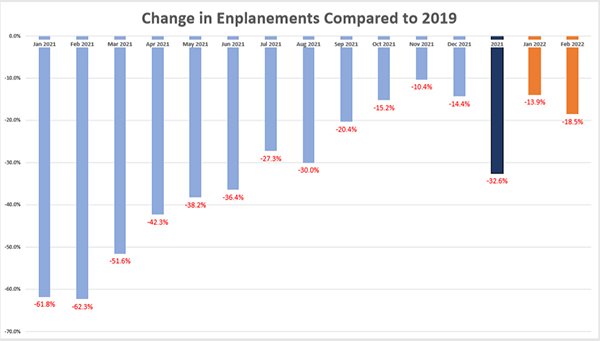 “In 2021, numbers began to pick back up and by the end of the year, the average traffic count was down by 32 percent for the year. Our first couple of months in 2022 have been strong, and industry forecasts predict that enplanements will recover by 85 to 90 percent in 2022.”

From what XNA officials can glean from social media and feedback from passengers, people are ecstatic to be traveling again. Many travelers have been stuck at home for the past couple of years, so getting out and traveling presents a sense of normalcy.

“The energy at XNA feels like pre-pandemic times where people are going about their travels with excitement, and our terminal is bustling once again,” English said. “It’s a great feeling to have our passengers back.”

Historically, more than 60 percent of XNA’s enplanements have been business travelers. English said it’s no surprise that their enplanements continue to increase as NWA’s larger companies resume traditional business travel. But with many companies allowing employees to work remotely, destinations that are typically leisure-based were popular for XNA passengers. 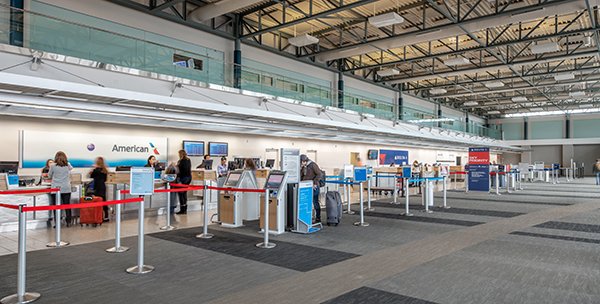 After a drop in passengers following the latest COVID variant, Clinton National is once again seeing an uptick.(Photos by Keith Branch)

“At the terminal, we’re currently working on plans to add canopies over a portion of the front curb to shield passengers who are being dropped off from weather,” Malinowski said. “We’re updating our terminal redevelopment plan that includes building a central utilities plant to provide the needed infrastructure for a replacement baggage claim, TSA checkpoint and concourse – all monumental projects that will continue the look and feel of our ticket lobby.” 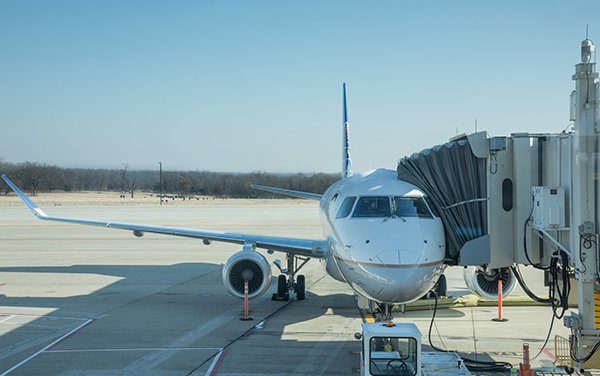 Construction on a Hampton Inn at the airport is expected to begin later this year; a public art project at the airport is completed; and a $60-million safety project update to taxiways and the main runway is underway.

Good airports are important not just for people, but the economy. Jay Chesshir, president and CEO of the Little Rock Regional Chamber of Commerce, said when chamber officials speak with potential economic-development prospects about reasons to choose metro Little Rock and Central Arkansas, the airport is always one of the primary points of interest. 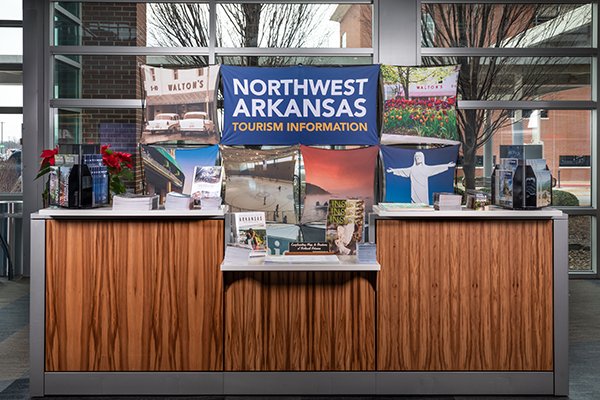 At XNA, “the energy… like pre-pandemic times where people are going about their travels with excitement, and our terminal is bustling once again.” (Photo by Keith Branch)

“We have also had significant success with the airport and its management team when we have clients who need to consider air service to new locations based upon their project,” Chesshir said. “People are amazed they can be from downtown to Clinton National in eight or nine minutes. The ease of being able to get in and out of there and also the opportunity to travel to the destinations flown from Clinton National Airport is also a really huge asset for us. And being one of less than 10 airports in the country with no debt speaks to the amazing management of the airport commission and its staff over many, many years.”

XNA improvements underway include a skybridge project that will include a renovation to the lobby area with a bridge connecting the parking garage to the main terminal building. The bridge will allow passengers to bypass the lobby/ticketing area and go directly to the TSA security checkpoint. 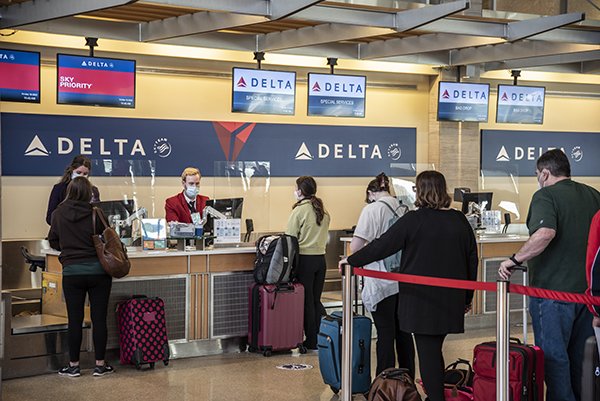 At Clinton National, the terminal redevelopment plan is being updated. (Photo by Jamison Mosley)

“This project is particularly exciting for XNA because it will update the outside of the terminal, giving the airport a fresh new look,” English said. “Further, XNA is partnering with OZ Art to curate two murals on our maintenance buildings on the north end of the property. We hope to bring more art to the airport in the future, so that XNA’s terminal is reflective of the vibrant art community in NWA.”

New flight offerings have been popular such as Breeze Airway’s nonstop flights to New Orleans. English personally booked a trip to New Orleans in January, and it was less than $150 roundtrip. “I always recommend travelers keep an eye out for Breeze’s promotional campaigns, and to price compare with our six airlines that provide service out of XNA,” she said. 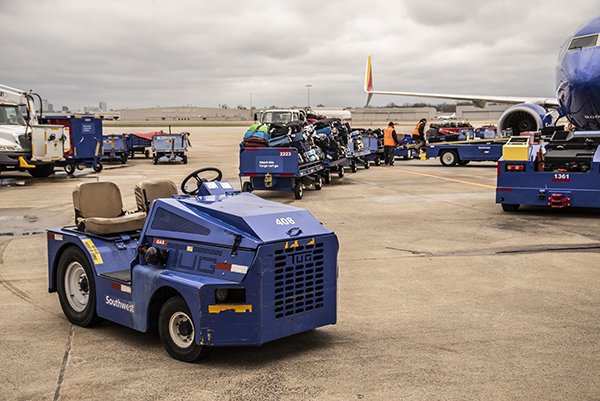 While passengers across the country who refuse to wear masks have caused disruptions, English said XNA has been relatively lucky to not have many refusing to do so in the terminal. “We get complaints about the mask mandate from time to time, but ultimately this decision is not made by the airports, and XNA follows and enforces any instructions given by TSA or FAA.”

Private Wireless is the Key to Business Resilience

Why Your Company Should Invest in Workplace Safety Tech