JPB Système’s KeyProd solution is engineered to enable manufacturers in any sector to reduce downtime by improving machine monitoring.

Paris, France – JPB Système, the leading manufacturer of efficiency-enhancing technology solutions for aerospace, aeronautic and other industries, has announced the commercial availability of its KeyProd solution, engineered to enable manufacturers large and small and in any sector to reduce downtime by improving machine monitoring.

The result of extensive research and investment by JPB Système, the innovative cloud-based KeyProd introduces an advanced level of digitisation to production environments, and is designed to connect, track and measure the effectiveness of all elements of the manufacturing process – including existing software, machinery and associated applications.

As a web-based solution, KeyProd works by providing a consolidated real-time vision of production operations to analyse different quality and performance indicators such as overall equipment effectiveness (OEE). By conveniently monitoring these indicators via a smartphone, table or PC, manufacturers can assess the different causes of machine downtime, take steps to correct and anticipate the various problem areas and reduce future stoppages. In some cases, feedback from initial users indicates that use of KeyProd can deliver an OEE of up to 15%*.

For manufacturers, this results in an unprecedented capability to enhance day-to-day production performance and, hopes JPB Système, will empower those companies seeking to embrace intelligent manufacturing and the Industry 4.0 revolution.

Among those companies to have trialled KeyProd is developer and manufacturer of connectors and associated components for electronic applications, Radiall.

Commenting on the integration of KeyProd, Rattena Tang, Project Manager at Radiall, says, “We have used KeyProd on a robotic assembly machine, where it enabled us to quickly monitor the machine’s production indicators; understanding the causes and frequency of stoppages.

“KeyProd was very easy and quick to install, and the simplicity of the user interface allows operators to quickly enter the reasons for a stoppage, facilitating the identification of issues and their causes from the field. Collectively, this has enabled us to establish targeted action plans to improve the efficiency of our system,” Tang concludes.

The eyes and ears to increased machine performance 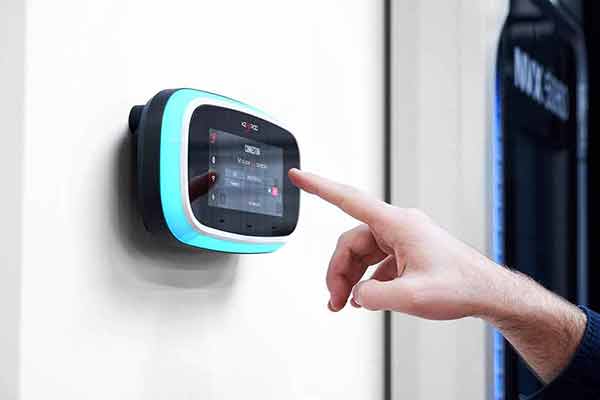 JPB Système has developed KeyProd to operate in conjunction with a compact and wireless hardware solution that ‘feeds’ it the necessary KPI data (OEE, TEEP etc) to analyse and process. Installed quickly, easily and directly onto the exterior of production equipment via magnetisation, this non-intrusive touch-screen device gives manufacturers access to continuous real time analysis of the machine’s operating status to identify productivity drops, by ‘listening’ to vibrations. This valuable insight into machine performance enables users to respond to any issue directly and better understand the respective causes in order to respond to future trends. Two ergonomic versions of the KeyProd-linked companion hardware solution have been created to suit the different requirements of users. The first, KeyVibe, is an entry-level option geared towards supporting those manufacturers whose level of production automation may still be developing. In such cases, the company expects KeyProd to deliver rapid and tangible productivity improvements.

Leveraging AI for even greater visibility

For medium-sized and larger companies with typically more established levels of automation and larger series production runs, a second and more advanced version of the same hardware solution has been created to deliver the same benefits but with increased functionality to offer even greater visibility. Using artificial intelligence, the company’s KeyNetic solution monitors production orders in real time and automatically counts, for example, the number of manufactured parts per day/week/month, the speed at which they’re produced and if that speed is correct. As such, users are granted the means to adjust the count of manufactured parts and identify the various issues arising during production cycles in just one click. This, expects JPB Système, will offer invaluable support for those companies seeking to extend their Industry 4.0 capability and optimise OEE performance across production.

Commenting on the introduction of KeyProd, Damien Marc, CEO, JPB Système, says, “KeyProd really is a genuine breakthrough for any manufacturing company seeking to increase throughput and decrease production downtime, which in some sectors can amount to many thousands in costs for every minute a machine is idle.

“We have developed and fine-tuned KeyProd over many months, having listened to market feedback on the real production challenges faced by manufacturers in different sectors. The result is a solution that gives manufacturers complete visibility and control of their factory floor performance in just one click on their smartphone. Crucially, this will promote more efficient and profitable production for manufactures, regardless of their size”, Marc adds.

A primary benefit of KeyProd is its fundamental ability to actually create and supply necessary data, which addresses and overcomes a common problem faced by manufacturers who sometimes lack the useful data or means to retrieve it. Additionally, unlike the case with some similar less versatile devices on the market that are only compatible with more recently developed machines, KeyProd can be up and running quickly and easily without the need for cables or wiring across older, less sophisticated production equipment.

JPB Système is now shipping KeyProd through a newly created, wholly-owned group company of the same name. The solution is accessible via monthly subscription (minimum 12-month contract) packages integrating either KeyVibe or KeyNetic. More information on KeyProd is available by emailing [email protected]

About JPB Système
Founded in 1995, JPB Système is the leading manufacturer of efficiency-enhancing technology solutions for aerospace, aeronautic and other industries. Headquartered in Paris-Villaroche business park (France), the company serves some of the industry’s largest manufacturers with its industry 4.0-based process, including Safran, Pratt & Whitney, GE, Rolls-Royce and ITP Aero. Collectively, the company employs 120 people and enjoys an export share of 85%. Turnover in 2019 was €22 million.

As well as its French base, JPB Système operates a production facility near Krakow, in the Polish Aviation Valley, and a North American office in Cincinnati, USA.

JPB Système has been rewarded with nine Golden Supplier Performance Awards by French multinational aircraft engine and defence company, Safran, for its continuity in the supply chain and its quality excellence. The company is a member of the BPI France Excellence network, FrenchFab, FrenchTech, Astech Paris-Region, GICAT and GIFAS, and is labelled Vitrine Industrie Du Futur by AIF.