By BF Editors
From the September/October 2022 Issue

Talent is a top factor for companies considering a location in which to locate or expand. Investing in a place that supports myriad requirements of today’s fast-paced enterprises is essential. Innovation hubs (often also called innovation districts) support these needs through resources that include institutions and higher education, companies, entrepreneurs, and infrastructure working together to foster discovery and advancement. While not always, these hubs may be focused on attracting investment to economically depressed areas. The central tenet is a big picture plan executed to create a place where companies—and their employees—will find resources they might not find elsewhere.

In May 2022, a brief from the Congressional Research Service outlined that Congress is considering the establishment of a new regional technology and innovation hub program in U.S. competition legislation. The House and Senate are reconciling H.R. 4521, the America COMPETES Act of 2022, as agreed to by the House in February, with the version as agreed to by the Senate on March 28, 2022. The Senate substituted the text of H.R. 4521 with S. 1260, the United States Competitiveness and Innovation Act.

Both bills would establish a competitive award program to plan for or implement regional consortia in an effort to advance innovation and technology-based economic development.

Since Truist Financial selected Charlotte, NC for its headquarters in 2019, the nation’s sixth-largest commercial bank has been on a quest to inspire and build lives and communities across the Charlotte Region. With a strong culture, mission and values, Truist leads by example and is synonymous with the robust economic development that continues to define the second-largest banking center in the U.S.

Given the sheer scale of the region’s growth—more than 80 people move in every day—companies including Truist must attract and retain a workforce in one of the hottest markets in the U.S. and one defined by a thriving innovation economy. For Kimberly Moore-Wright, Chief Teammate Officer and Head of Enterprise Diversity at Truist, a key selling point for her team is how financial technology, a subset of an innovation economy, is leading the shifting banking ecosystem in the Charlotte Region. 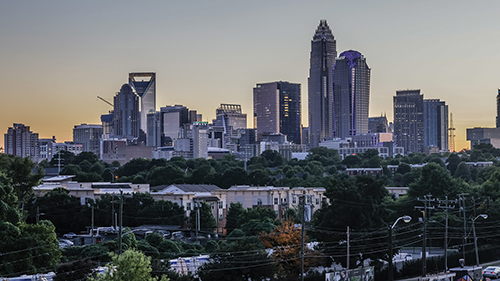 In Charlotte, NC, millennials are moving for the tech landscape as well as quality of life. (Photo: City of Charlotte)

“People think about Charlotte as this huge financial and banking sector, and it is. But Charlotte is really becoming an innovation incubator and fueling unprecedented growth and opportunity in the innovation economy, and that includes FinTech,” Moore-Wright said.

According to the Charlotte Regional Business Alliance, which collaborates to promote and advance economic development in a 15-county, bistate region, the innovation economy is a relatively new branch of economics built on the intersection of technology, knowledge, and entrepreneurship.

The Charlotte Region is home to nearly 45,000 professionals within the innovation economy, and financial services is among the fastest-growing sectors in the region by number of professionals.

In fact, Charlotte is one of the most rapidly growing tech talent markets in the U.S. and has the fourth-highest millennial population growth among top tech markets. The city’s finance sector has the third-highest concentration of financial services talent among the top 50 metros, and its talent base in the financial services industry continues to grow with the sixth-most in-migration in 2020.

Hillyard To Invest Over $50M In Missouri Expansion