During a special press conference at the State Capitol on Monday April 11, First Lady Susan Hutchinson announced a national initiative called the “Shine Hope Campaign,” in which First Spouses raise awareness for child abuse victims and survivors across the U.S. Many in attendance at the event wore blue in observation of child abuse awareness, and the Governor’s Residence and State Capitol were lit in blue Monday evening as a symbol of hope for child abuse victims and survivors.

On April 11, Arkansas and 14 other states, including Louisiana and Texas, helped raise awareness for child abuse by either lighting their Governor’s residence in blue, wearing blue, lighting a prominent state structure blue, visiting a local Child Advocacy Center, issuing proclamations in support of April as Child Abuse Prevention Month, or promoting on social media with the tagline #ShineHope.

All participating states have pledged to recognize child abuse and neglect as a serious problem affecting every segment of its communities during Child Abuse Awareness Month in April.

“For her entire life, the First Lady has been a fierce advocate for children and their wellbeing. I was proud to stand by her side today while she kicked off the #ShineHope campaign as I proclaimed today as Children’s Advocacy Center Day,” said Gov. Hutchinson in a social media post. 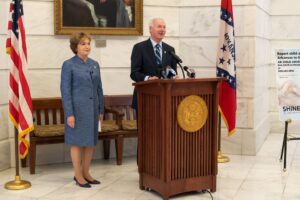 According to statistics released by the Arkansas Governor’s Office:

Nearly 700,000 children are abused in the U.S. each year.There are an estimated 42 million survivors of child sexual abuse living in the U.S. today.90 percent of child abuse victims know their abuser.About 1 in 10 children will be sexually abused before they turn 18.Children’s Advocacy Centers nationwide serve more than 370,000 kids each year, helping them to recover from trauma caused by child abuse.

Nationally, there are 17 child advocacy centers and 10 satellite locations serving all 75 counties in Arkansas. You can find out more about your local CAC and how you can become involved at www.cacarkansas.org.

2 crore 20 lakh occupations have been lost in Corona