By Donna Clapp
From the July/August 2022 Issue

At the beginning of the 21st century one of the world’s most famous futurists, Google’s Chief Engineer Ray Kurzweil predicted that 20,000 years of technological progress would be condensed into the current 100 years. Known for being right 86% of the time with his predictions, this time Kurzweil underestimated the world’s technological advancements as progress and change have accelerated even faster than he predicted. How fast is technology advancing?

As a tangible example, let’s look at the growth of global internet use. According to Data Reportal, a company that analyzes technology adoptions statistics, there are around 7.9 billion people on the planet, and about five billion use the internet. That translates to 63% of people around the world using the internet—192 million new users since 2021. The computing and processing capacity of computers hits double figures every 18 months as well.

According to CBRE’s 2022 Scoring Tech Talent Report on North America, the number of tech talent workers in the U.S. has far surpassed the 1.2% national average for total employment growth over the past five years and has seen an increase of 12.8%. That is an additional 631,000 workers in the tech sector.

Where tech talent is concentrated, as a percentage of total employment, is one of the most influential factors in the potential growth of the industry in a region because it offers a conducive environment for innovation. For example, the Silicon Valley region of the San Francisco Bay Area, along with Ottawa, Canada, has the highest concentrations of tech talent in North America, at 11.4% and 11.6% respectively. Last year, the U.S. added 136,000 tech jobs, which brought the national total to 5.5 million tech jobs. This included a 159,000 increase in software developer and programming jobs.

For a region to develop a large number of highly educated tech workers it takes a long-term strategy with partnerships between economic developers, workforce developers, higher education institutions and high tech companies. Here are some of the locations in North America who have been successfully creating tech hubs and developing tech talent to attract innovative companies to their region.

As North America’s tech talent employment bounced back, Utah, and Salt Lake City specifically, rebounded strongly, proving that the region’s focus on education has been a successful workforce development strategy. Major contributors to the tech talent pool include the University of Utah, Utah State, and Brigham Young University, which along with other educational institutions provided Utah with 26,036 tech degree graduates in the past five years. During that time, the region’s tech workforce grew by 29%, and its computer engineering talent grew by 51%. This growth has made the area one of the most concentrated markets of 25-39-year-olds with an increase of 20,996 or 19% in this age range.

“What we have learned is that millennials really, really love nature, and the outdoors,” says Benjamin Hart, Deputy Director of the Utah Governor’s Office of Economic Opportunity. “They want to have an excellent quality of life. We did a study, and it showed 70% of the people who have moved here for work really chose Utah because it provides great outdoor recreation opportunities. So, for us, I think people are willing to trade in a big, crowded city for the chance to have a better quality of life, and they’ve found that here in Utah.

We’re able to attract world-class talent because of the amenities that we have with five national parks, and the best trail systems on the planet. This is a wonderful place to not only work, but also to play. And I think being in a dream location is why so many people are flocking here.”

Attracting the right talent is just one part of the workforce development strategy though, especially when it comes to high tech jobs. Another important ingredient is education and increasing the number of tech graduates.

“The talent pipeline is so important to us, it’s why we brought workforce development in house to work with our economic developers,” says Hart. “We’ve been really focused on developing partnerships between K-12 education and our systems of higher education. At the heart of all this is the incredible tech companies in this community like Qualtrics, Adobe, and Northrop Grumman who have been willing to step up and step into the classroom. We are seeing a collaborative model where education and industry are working together and that is making all the difference because our educational system is so well tied in with what employers are asking for.”

Utah’s largest tech hub lies in the region they call Silicon Slopes, between Salt Lake City and Provo. The region is a home to well-known names like Adobe, Cisco, and Northrop Grumman, but is also host to many innovative start-ups, to the tune of 6,000 high tech companies.

Housing is also cheaper than many other tech regions. In fact, according to CBRE’s 2022 Scoring Tech Talent Report, Utah ranks 36th in the nation out of 50 states (50th being least expensive) in terms of being the least expensive region to operate a high tech company.

Northrop Grumman, the biggest security, and defense company in Utah, recently announced a large expansion in Weber County, which will bring its number of employees across the state up to 7,350. “This is a significant win for northern Utah. Northrop Grumman is the state’s largest private sector employer in aerospace and defense, and they continue to demonstrate their confidence in doing business here,” said Theresa A. Foxley, President and CEO of the Economic Development Corporation of Utah. “On a broader level, we as Utahns can be proud of what this means in terms of national defense and global security.”

THE BIG APPLE: QUALITY OF LIFE AND QUALITY EDUCATION

Unemployment rates in New York City have been at an all-time low for the past several years, but the city still garners the honor of being the 5th best market in North America for tech talent according to CBRE’s 2022 Scoring Tech Talent Report.

“We really pivoted towards investing in homegrown tech talent after the financial crisis in 2008,” says Dan Clark, VP/Director of Business Development at the New York City Economic Development Corporation. “It was really an academic strategy to start with. We established a new Cornell Tech campus on Roosevelt Island, and we worked with our CUNY (City University of New York) system, the largest college level public school system in the country. The CUNY program in particular we are very proud of. It’s called the CUNY Two X Tech and it’s doubled the number of tech bachelor’s degrees awarded.” 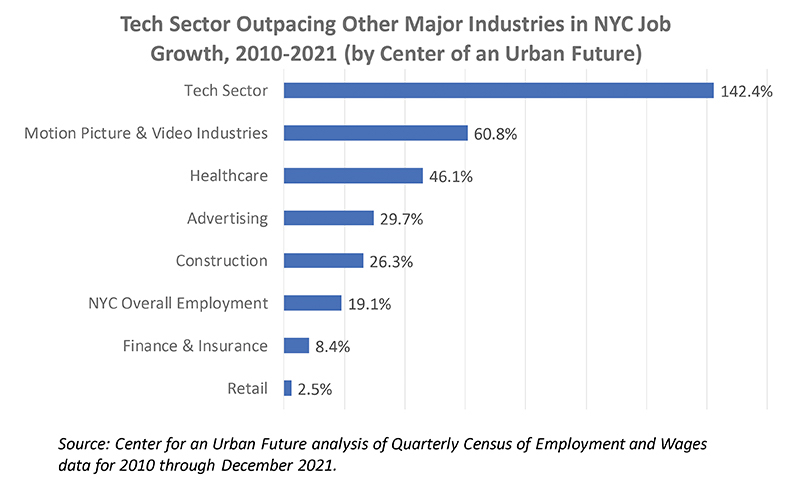 Across its five boroughs, New York City has at least 238 tech education and training organizations operating 506 programs in 857 locations. These include computer educations programs focused on children in the K-12 system and adult-oriented tech training programs. According to Forrester research, there are 3.5 million people with bachelor’s degrees in New York City, including 162,000 computer science degree holders. In fact, New York has the most computer science graduates at over 7,600 annually. The large number of college and university systems in the region, has led to New York City having more than 330,000 tech workers. And the region is working hard to increase that number with public private partnerships like CS4All, which is dedicated to bringing computer science education to all public school students in NYC by 2025, and a partnership between CUNY and Cornell Tech called the Breakthrough Tech Partnership aimed at preparing women in high school and college for high tech careers.

The good news is that those people graduating with high tech degrees are staying in the city after graduation, due not only to the tremendous career opportunities available there, but also to the quality of life the city offers.

“There’s a reason why our academic strategy works so well here,” says Clark. “It’s because young people want to stay [here] after they graduate. We have a much higher graduate retention rate than many other big cities, and that’s because we have the culture, the diversity, the nightlife, the art scene, the sports scene—everything that makes New York City great. When you talk about amenities, we just have more options than most cities.”

The huge talent pool available in New York City has the largest tech companies in the world expanding there. In just the past two years, the big four tech companies, Facebook, Google, Apple, and Amazon have planned major expansions of their New York offices.

In all, the tech sector is outpacing other major industries in New York City’s job growth. Between 2010 and December 2021, the sector saw an increase of 142.4% in jobs according to the Center for an Urban Future analysis of Quarterly Census of Employment and Wages data.

When it comes to industry, economic developers often look to create “clusters” in which several companies within the same industry locate in one location. But in so many ways, when it comes to the high tech industry, creating a “tech ecosystem” is a more appropriate term, which is the term Waterloo, Canada uses when describing its growth in high tech. High tech businesses needs more than other high tech businesses located near them to truly grow and innovate. They need an entire ecosystem of collaboration with K-12, higher education, local government, national government, and sometimes non-profit agencies. In Waterloo, their ecosystem is flourishing, and that is because they have worked hard to bring together all the elements high tech business needs to innovate.

Why Cyberattacks Are a Great Danger to Smart Factories