Dot Foods will build a $39M distribution center in Ingersoll, Ontario, and a $50.5M operation in Manchester, TN.

In Ingersoll, Ontario, Dot Foods Canada will invest $39 million to build a 126,500-square-foot distribution center. The company is a subsidiary of Dot Foods, Inc., the largest food industry redistributor in North America. Dot Foods Canada expects to hire 200 new employees from Ingersoll and surrounding areas in the next three to five years.

The Ingersoll distribution center will include offices and dry, refrigerated, and frozen warehouse space with docks. Construction will begin this spring, and the facility is scheduled to open in 2023. Dot Foods Canada currently has distribution centers in Calgary, Alberta and Brampton, Ontario. The company’s volume growth in Canada is driving the need for more warehouse capacity than the existing location can accommodate: Once the new facility is complete, it will replace the company’s headquarters and operations in Brampton. 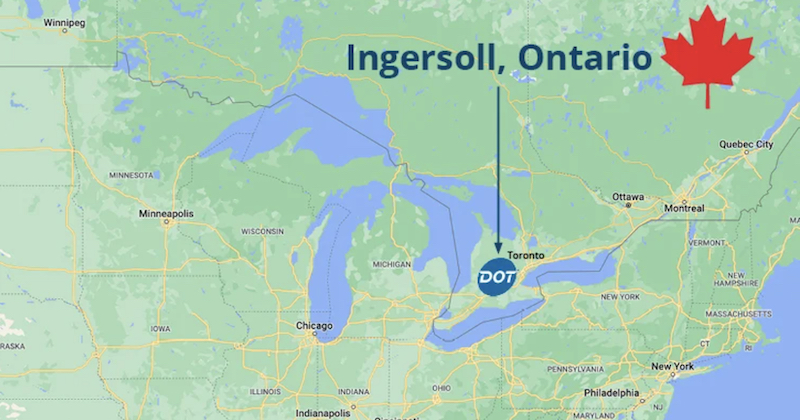 “We are excited about the plans for this new facility for our Canadian operations,” said John Tracy, Dot Foods Canada Executive Chairman. “Dot’s distribution model is in high demand in Canada, and that demand has driven the need to find a location that will provide the space and land needed for future expansion opportunities to 500,000 square feet. Ingersoll is a wonderful community, and we look forward to being a part of it.”

“We’re very excited to have Dot Foods Canada join the community in Ingersoll,” said Ted Comiskey, Mayor of Ingersoll, Ontario. “This investment will provide great jobs to support hundreds of families within Ingersoll and area. Due to Ingersoll’s strategic location, this will introduce new opportunities within the food sector for the Town, Oxford County and Southwestern Ontario as a whole.”

“There is great potential for growth in Canada,” explained James Baggs, Director of Sales for Dot Foods Canada. “This is the next step in helping us reach that potential. The new, larger distribution center in Ingersoll will allow us to better service our current customers and reach new customers across the country.”

Illinois-based Dot Foods will invest $50.5 million in the 177,000-square-foot plant and create 251 new jobs in Coffee County. Construction of the Manchester distribution center will begin late this summer, with a goal of having the facility operational in fall 2023. Dot Transportation, Inc., the company’s trucking affiliate, is already hiring truck drivers in the region.

“Tennessee has a lot to offer businesses like ours,” said Joe Tracy, Dot Foods CEO. “Dot first called Tennessee home in the 1980s and early 90s, and we’ve loved being back in the state since the 2015 opening of our Dyersburg facility. We are very excited to establish a second Tennessee location in Manchester. The most critical factor in continuing our business’ history of growth is talent. We know Coffee County and the surrounding region has a lot of it to offer. We look forward to joining this community and growing our Dot Foods and Dot Transportation family.”

The Manchester location will include offices and dry, refrigerated, and frozen warehouse space. Manchester will be the first of the company’s facilities to open with a Family Health Center on-site to provide convenient, high-quality, low-cost medical care to those on Dot’s health insurance plan. In addition, the Manchester location will be designed with the ability to expand all warehouse and office spaces in future years to meet Dot Foods’ growing customer demand among the southeastern U.S.

“Tennessee is uniquely positioned to provide companies with easy access to their markets around the globe,” said Tennessee Department of Economic and Community Development (TNECD) Commissioner Bob Rolfe. “We thank Dot Foods for locating another food distribution center in Tennessee and are confident that Manchester and Coffee County will support this company’s future success.”

In the last five years, the Tennessee Department of Economic and Community Development (TNECD) has supported more than 60 economic development projects in the Southern Middle Tennessee region, resulting in roughly 8,000 job commitments and $5.2 billion in capital investment.