The announcement from U.S. Steel in January that it would build a $3 billion “next generation” companion mill to its Big River Steel plant in Mississippi County kick-started a robust year for manufacturing in Arkansas.

U.S. Steel’s decision to double down on Osceola, and then November’s announcement from Highbar to spend $500 million on the first of two planned rebar steel mini-mills in town, reinforced a trend of global brands finding Arkansas.

Long known for row crops and chickens, Arkansas is being talked about in industry circles as a manufacturing diamond in the rough. Manufacturers are finding pro-business leaders at the local and state levels, favorable logistics and a willing and able workforce. And in the process, these new operations are helping transform lives for many rural Arkansans.

The plant will include an endless casting and rolling line — the first use of the technology in the United States, the Pittsburgh-based company said — and advanced finishing that’s both  cutting-edge and sustainable. The former process refers to a series of heavy metal rollers that slowly decrease an initial larger cast into the required thickness. The latter is a process by which a coating is placed on the surface of the metal, for cleaning or polishing, with extreme precision.

Both processes represent high-end, cutting-edge technology within the industry and illustrate U.S. Steel’s commitment to its current and future operations outside Osceola. Two years ago, firing up an EAF at an Alabama plant represented a $412 million commitment for the company.

Its investments in The Natural State, which include the $1.5 billion completed acquisition of Big River Steel last year, have transformed Mississippi County into one of the nation’s emerging steel corridors.

U.S. Steel CEO David Burritt likes what he sees on the ground in Arkansas. He noted the abundant and clean power available through Entergy Arkansas, connections to Class 1 rail lines as well as easy access to the Mississippi River and major interstates.

Hytrol employees at work in the Jonesboro and Fort Smith facilities.
(Photos courtesy of Hytrol)

“We had numerous site options, but Osceola offers our customers incomparable advantages,” he said.

Together with the existing Big River plant, the new U.S. Steel mill essentially will serve as a 6.3-million-ton mega-mill the company claims will provide the most advanced, sustainable steel on the continent. The company serves the automotive, construction, appliance, energy, container and packaging industries.

Burritt credited Arkansas officials on the ground, from Gov. Asa Hutchinson and the Arkansas Economic Development Commission to local and county leaders, for providing U.S. Steel with “the clear choice for a path to the future without roadblocks.”

Arkansas Secretary of Commerce Mike Preston noted the significance of the U.S. Steel announcement, which represents the largest economic development project in terms of capital investment in state history. 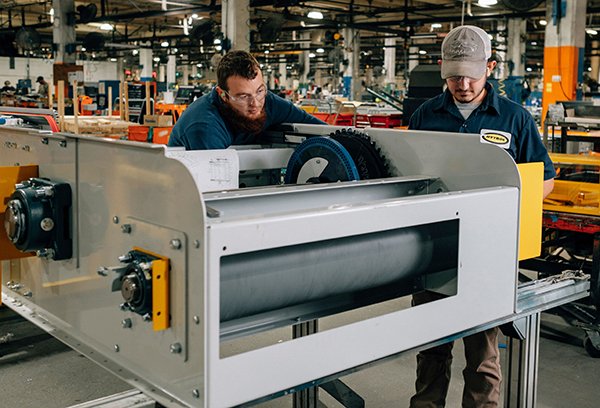 “We have continued to build on that momentum throughout the year, keeping our economy diverse, strong and healthy in a wide range of industries, such as food and beverage, packaging, timber and forest products, renewable energy, HVAC, aerospace and defense and more,” Preston told Arkansas Money & Politics.

Highbar, meanwhile, is a new company focused on sustainable scrap metal recycling and steel production. The force behind Highbar is the same person who brought Big River Steel to Mississippi County in 2014 — Dave Stickler, described by Forbes as the Steve Jobs of steel.

Before selling to U.S. Steel, Stickler liked what he found in Arkansas — accommodating governments at the local, county and state levels and a skilled and reliable workforce. And it didn’t hurt that Mississippi County provides access to the Mississippi River, major interstate highways and direct Class 1 rail connections.

At the announcement for the Highbar mill, an enthusiastic Stickler said his team had enjoyed “great success investing billions of dollars in northeast Arkansas,” and the new mills would be designed to be world leaders in a range of categories. 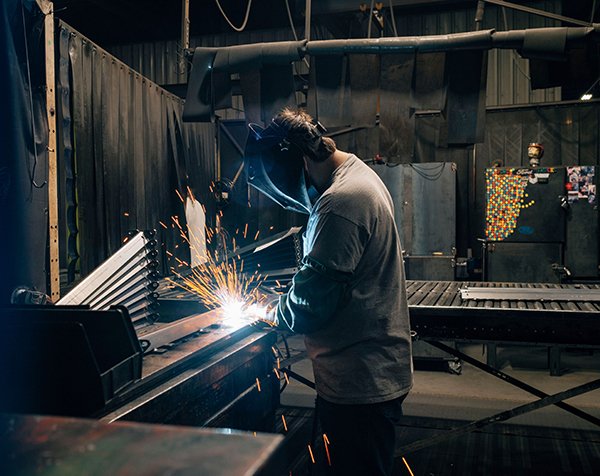 The first Highbar mill will sit on roughly 600 acres just outside Osceola. The site will include space for an expanded river port, Class 1 rail connection and a planned solar installation. Groundbreaking is expected early in 2023.

Manufacturing accounts for roughly 15% of the total state economic output and employed about 12% of the state’s workforce, according to the AEDC. That ranks Arkansas seventh nationally and third in the South in terms of percentage of the state workforce tied to manufacturing. Arkansas’s 148,000 industry workers earned an average annual salary of more than $61,000.

But there’s more to manufacturing in Arkansas than steel. Momentum has touched numerous industry sectors and reached all four corners. 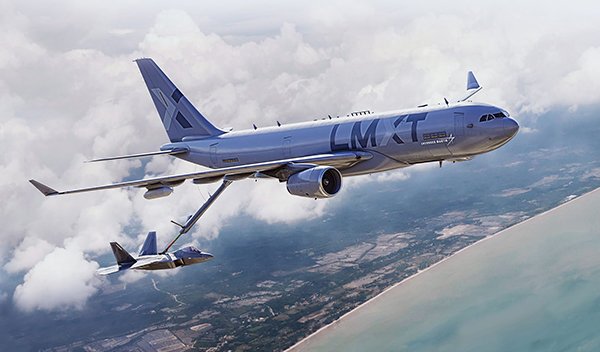 In 2022, Lockheed Martin and Airbus announced plans to build a factory at a site as yet to be determined in western Arkansas, where Airbus will build aerial refueling boom systems for the LMXT strategic tanker aircraft. The boom is the long pipe extended down from a refueling plane and attached to another aircraft, enabling the latter to fill up.

The LMXT represents the next-generation step in the U.S. Air Force’s strategic refueling mission. Airbus will build the booms and expects to employ hundreds of local workers at competitive salaries.

Lockheed Martin, meanwhile, announced in October plans to build a new facility at its Camden Operations, where it already employs more than 1,000 workers. The expansion will support increased production capacity for the PAC-3 Missile Segment Enhancement, billed as the world’s most advanced air defense missile.

Several weeks later, the company received an order from the U.S. Army to make more high mobility artillery rocket systems. The HIMARS systems, built in Camden, have been a part of the United States government’s aid package to Ukraine, and the rocket launchers have proven lethally effective on the battlefield. Company officials don’t anticipate the need for more space or workers to accommodate the order — yet.

Through the third week in November, AEDC had issued 24 announcements of multimillion-dollar investments in Arkansas, either through plans to build new facilities or expand existing ones.

A few of the most noteworthy projects include Charlotte-based Albemarle Corp.’s $540 million commitment to expand and modernize two bromine facilities in Magnolia; Tractor Supply’s plans to build a $120 million, 1.2-million-square-foot distribution center in Maumelle and  cold-storage provider Americold’s $84 million planned expansion of its Russellville plant. In addition, Italian ammunition manufacturer Fiocchi plans to invest $41.5 million to expand operations at the Port of Little Rock; Emerson is building a new $35 million tool-manufacturing plant in Ash Flat; and Independent Stave has announced a $30 million stave mill outside Batesville.

In February, Envirotech Vehicles became the second firm to announce plans to build electric cars in Arkansas. The company announced it had purchased an existing 580,000-square-foot facility in Osceola for an undisclosed sum. The company plans to convert the plant into its U.S. manufacturing base, which is expected to employ more than 800 workers in high-paying jobs, part of an $80.7 million, five-year investment.

Once full production is realized in about two years, the company plans to invest another $200 million in its Osceola operations and turn out 2,000 cars a year.

As if on cue, Envirotech CEO Phillip Oldridge credited the work of local and state officials and touted the area’s location and the “perfect business climate and local workforce to allow us to see growth and success in the region as the state’s first commercial electric vehicle manufacturer.”

To meet this growing demand, more institutions are offering skills training in lieu of the traditional, post-high school college path. For Preston and the folks charged with recruiting businesses to Arkansas, such training is part of the pitch.

“But today, we still have critical positions unfilled, so we are working with our companies and our colleges to train new employees and keep the skills of current employees updated to meet demand. This way, we can help manufacturers thrive, bring more high-paying jobs to hardworking Arkansans and stay prepared for changing needs.”

In many cases, workers with a two-year certificate related to workforce training are making more than graduates with bachelor’s degrees from traditional colleges and universities. Across the state, high school graduates who choose the former are finding opportunity.

Helping Arkansans find opportunity will be the $35 million Arkansas Manufacturing Training Center in Conway, a joint venture of the Arkansas Office of Skills Development and the Conway Development Corporation, announced in November.

Jonesboro’s Hytrol Conveyor hit record numbers this year in both shipments and the growth of its workforce. The company broke ground on a new warehouse and distribution center in Jonesboro and announced plans to expand its new $20 million Fort Smith conveyor production plant. The company currently employs 1,200 between two facilities in Jonesboro and will ultimately employ 350 in Fort Smith.

Hytrol President David Peacock attributed much of the company’s success to this focus on workforce development.

“We can’t speak for the entire manufacturing sector, but we can speak to how much support we’ve gotten from the state of Arkansas,” he said. “Our growth would be much more difficult without the effort that Arkansas has put into creating a climate that is focused on workforce development coupled with the recruitment and retention of businesses such as Hytrol.”

Back in Mississippi County, this influx of high-paying jobs is changing lifestyles. But don’t try telling Osceola’s biggest cheerleader that manufacturing is a recent phenomenon to the county.

Factories in Osceola produce everything from steel and car parts (DENSO and Systex) to plexiglass (Evonik CYRO) and even sauces for national restaurant chains (Kagome Creative Foods). And then there’s the 2 million-square-foot American Greetings plant, open for about 60 years. Locals say you could place 57 football fields inside it.

Local plants draw workers from Jonesboro, Memphis and small communities throughout the area, Owens said, all spending money in town. And Osceola is bracing for the change wrought by the influx of more high-paying jobs. Ground was broken recently on a $30 million, higher-end housing project called Riverback Estates with houses selling in the mid-200s. The new neighborhood is expected to be completed by 2024, and each house will include advanced technology, including EV charging stations funded and installed in partnership with Envirotech.

The town of roughly 7,000 is poised for future growth, something many rural parts of the Delta haven’t experienced in decades. This past summer, the U.S. Bureau of Labor Statistics released data that found Mississippi County to have the highest average weekly wage in the state at $1,513. Not Benton County with all its Fortune 500 executives. Not Washington or Pulaski County — Mississippi County.

The second-highest weekly wage was earned in Calhoun County, home to the high-paying jobs at Lockheed Martin’s Camden Operations.

Manufacturing is transforming parts of Arkansas long thought forgotten as most of the state gravitated to the Little Rock or Northwest Arkansas metros. But more Arkansans are finding out that opportunity is not exclusive to urban or suburban addresses.

“Especially now with the steel mills, industry has changed Osceola and the county a lot,” Owens said. “People are eating here, buying gas here, shopping here, living here. … The pay is second to none. They’ve changed a lot of lives.”