The Crosby Group raises $50,000 to support educational opportunities for US military children.

The Crosby Group, a leading manufacturer of rigging, lifting, and material handling hardware and equipment, has concluded its 2022 Rigging for the Troops campaign supporting the Children of Fallen Patriots Foundation. Through the combined support of its loyal channel partners, end users, and employees throughout the United States, Crosby once again surpassed its original fundraising goal of $25,000 and raised a total of $50,000 for the Fallen Patriots.

Fallen Patriots provides college scholarships and educational counseling to military children who have lost a parent in the line of duty. After government programs, the average shortfall in college funding is $25,000 for an individual student.

This is the third year Crosby and its partners have come together to support the Fallen Patriots. In total, $125,000 has been raised to-date for this worthy cause.

From September 1 through October 31, The Crosby Group committed to donate $500 for every Crosby and ACCO in-person training event it hosted in the US. In addition, proceeds from the popular User’s Guide for Lifting online training course during this time went toward the goal.

Robert Desel, CEO of The Crosby Group, said: “We sincerely appreciate our channel partners, end users, and employees who, once again, made this year’s campaign a tremendous success. We are honored to make this donation to further support the Foundation’s important mission and help meet the educational needs of Gold Star children.”

Cynthia Kim, Co-Founder and Co-Chief of Staff of the Children of Fallen Patriots Foundation, said: “Fallen Patriots is truly honored to partner with The Crosby Group. Not every patriot wears the uniform, and it’s patriots like Crosby who make our mission possible. Your generosity sends a message to the children left behind, that they are not forgotten, and their fellow Americans honor the service and sacrifice of their parent. Thank you for ensuring these children have the bright future their parents would have wanted for them. You’re giving them hope and resilience.”

Approximately 25,000 children have lost an active-duty parent in the military over the last 35 years. Of those, 97% of casualties are men, leaving behind single mothers to care for their families, and 60% report having trouble making ends meet. The foundation said that $625 million is needed nationwide to cover the gap between government assistance and the actual cost of a degree. Since 2002, Fallen Patriots has provided more than $61million in total assistance to more than 2,700 military children with more than 900 graduates.

The Crosby Group has trained more than 500,000 rigging professionals since launching its training program in 1991. With a US manufacturing footprint that includes plants in Texas, Oklahoma, Arkansas, South Dakota, Pennsylvania, and Alabama, The Crosby Group’s involvement with the country’s military stretches back to its earliest days, supplying shackles and other hardware for military equipment. Today, more than 40 US Veterans work in the company’s facilities designing, manufacturing, and distributing the best rigging hardware and material handling equipment in the world.

About The Crosby Group
The Crosby Group is a global leader in the innovation, manufacturing and distribution of products and services used to make lifting and load securement safer and more efficient, with premier brands such as Crosby, Gunnebo Industries, Crosby Straightpoint, Crosby BlokCam, Crosby Airpes, ACCO, McKissick, Crosby Feubo, Crosby IP, and Speedbinders. With global engineering, manufacturing, distribution and operations, the company provides a broad range of products and solutions for the most demanding applications with uncompromising quality that exceed industry standards. thecrosbygroup.com

The Crosby Group once again surpassed its original fundraising goal of $25,000 and raised a total of $50,000 for the Fallen Patriots. 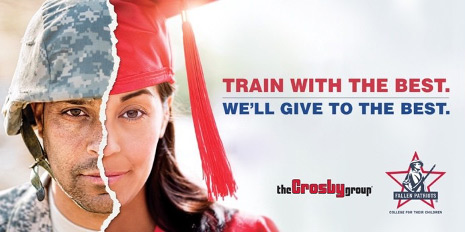 The Crosby Group supports the Children of Fallen Patriots Foundation, which honors the sacrifices of our fallen military heroes by ensuring the success of their children through college education. 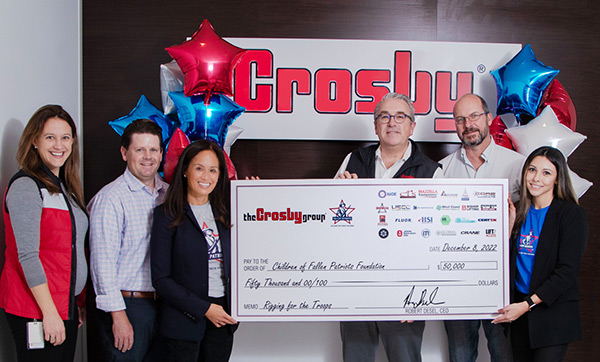