Connecticut is situated between two major metro areas. But the Nutmeg State offers much more than just a great location.

By the BF Staff
From the March/April 2022 Issue

Officials in Connecticut are always fast to point out the geographic benefits of the Nutmeg State, just northeast of New York City and close to the major metropolitan areas of Boston and Providence. To them and many others, location is everything and a great reason while businesses should consider the state for their next economic development project or corporate relocation.

Still officials across the state realize that they still have to make their case with many companies because of the state’s relatively high cost of living and higher taxes.

The Town of Berlin, CT: Center of the Northeast

The Town of Berlin sits at the geographic center of Connecticut with a new commuter rail station that links Springfield, MA, Hartford and New Haven with a connection to New York and Washington, DC. What’s more, it is only about 2.5 hours by car or truck to Boston and New York via major interstate highways.

Berlin is an industrial hub that has seen continuous growth in a number of sectors including construction, home health care, retail, restaurants, manufacturing of medical devices, hardware and aerospace.  Assa Abloy, a hardware manufacturer that makes locks, hinges and door handles, has a significant presence in town, with close to four hundred employees.

The town has a sizable presence in the utilities sector with corporate offices for Eversource Energy, an electric and gas utility, and is home to the western New England Headquarters of Comcast.

Another source of recent growth are mixed-use projects. At least three such projects have been approved or are under construction presently. Once finished it will feature more than 350 apartments, and 50,000 square feet of commercial space that will result in $50 million in private investment. This growth in new apartments will allow young professionals to live and work in Berlin.

Berlin’s economy has changed over the years and includes firms that employ individuals who work hard every day using their heads, hearts and hands. The town now has more than 20,000 inhabitants, and as economic development director Chris Edge notes, Berlin is unique because people who grow up in Berlin, or move here later in life, never want to leave.

“Many businesses in Berlin are family-owned-and-run, making for a strong bond in the community,” stated Edge.

Steady growth is the goal and with the competitive nature of business attraction, the Town of Berlin has added levels of tax abatements that range in duration from three years to 10 years. These tax abatements are only available on buildings and projects new to the tax rolls, but the Berlin leadership sees these tax abatements as a tool to bring in new jobs, investment and excitement to the center of Connecticut.

With a perfect spot in the middle of the Northeast market, on highways and commuter rail, Berlin is a location you should check out!

Middletown, CT has had a vision to reconnect its iconic New England downtown to its scenic riverfront along the Connecticut River. The city is moving on two major projects to connect the two and give access to the riverfront’s assets to all residents.

Middletown is the midway point between New York and Boston. It is in central Connecticut between Hartford and New Haven. Downtown Middletown has a mix of uses including retailers, restaurants, services, professional offices, and residential units. It has a catchment area of more than 30 miles according to cell phone tracking data. Middletown’s employers bring in more than 10,000 workers daily from a regional employment base of more than 800,000 residents living in a 10- to 15-mile radius around downtown. 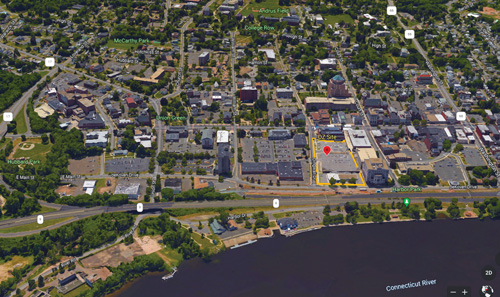 The downtown project comprises three continuous lots totaling 3.5 acres overlooking the Connecticut River. They all sit in the city’s opportunity zone and are ready for development. Two lots of 1 acre and 1.5 acres are city-owned parking lots fully served by all utilities. The other 1-acre lot is privately held, and its owner is willing to partner with the city on redeveloping the site.

The parcels are in the heart of Middletown’s thriving downtown where visitors and residents enjoy more than 60 restaurants, dozens of retailers and entertainment venues.  It is walkable to Wesleyan University with its more than 3,000 students, and downtown is home to major employers such as Middlesex Health hospital and the Community Health Center that, together, employ nearly 5,000 staff.

Each parcel has complete utilities that should be adequate to support the proposed development. Middletown has committed $20 million of bond funding to construct a new public parking garage, most likely at 222 Main Street to serve the public, police department and the new development.

Middletown’s opportunity zone offers developers a low-risk project due to the city’s extremely economically vibrant and historically iconic downtown, close affiliation with Wesleyan University and major employers including Pratt and Whitney, Middlesex Health, and the Community Health Center. This site can become the key connection between the city’s Urban Commercial Center and the future riverfront development, the planning for which is scheduled to be completed this summer.

The city is seeking a public-private partnership to construct an exceptional development that will bring people and business to downtown, provide places where people will live and work, and become a regional attraction. Middletown is looking for creative ideas for developing the site for mixed uses including housing, offices, shopping, and entertainment. The final project will provide the public with a place where it can gather and enjoy the river views and access to the new riverfront.

Middletown has always had a strong connection to its riverfront on the Connecticut River and is investing in it to connect it to downtown and make it more accessible to the public. The city started its riverfront development by investing $60 Million in decommissioning the city’s wastewater treatment facility that sits on seven acres of the riverfront. The city has engaged a consultant team in developing a master plan for the riverfront that will extend Harbor Park south along the river. The final plan is due later this spring.

The city and its consultant team have been engaging the public since August 2021 to develop a new vision and plan from the bottom up. To date we have touched more than 600 people who have said they want to live, “hang out”, walk, bike, dine and be entertained on the riverfront.  Essentially, the public has told the city to connect the riverfront to Middletown’s vibrant and exciting downtown.

This project will completely transform Middletown’s riverfront and, by extension, its downtown. The funding sources will be some combination of public funding from federal, state and local governments and private investment.

So far, the city has secured a $2.6 million grant from the State Department of Economic and Community Development to remediate brownfield properties adjacent to the decommissioned treatment facility. It has also invested $300,000 from EPA for site assessments and $5 million in local funds for investigations and improvements.

In the end, these guiding principles will define Middletown’s new riverfront: