A popular bumper sticker of the 1970s, spotted throughout rural areas, read, “Don’t complain about a farmer with your mouth full.”

The same can be said about the trucking industry. Except in the latter’s case, the phrase doesn’t go far enough. Trucks deliver 72.5 percent of the nation’s freight weight, per the American Truck Association, representing $732.3 billion in gross freight revenues, or eight out of every 10 dollars spent on shipping in 2020. 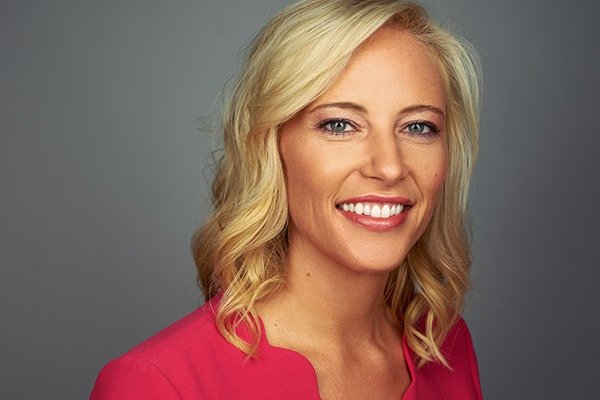 In Arkansas, the impact of the trucking industry on local and state economies is even more pronounced. According to Shannon Newton, president of the Arkansas Trucking Association, 92 percent of the manufactured tonnage in Arkansas, 280 tons a day, moves on a truck. Moreover, being a rural state, nearly nine out of 10 Arkansas communities rely exclusively on a truck to get goods in or out.

Such statistics illustrate how virtually everything you eat, wear, drive or can lay hands on at work or home spends at least part of its journey — from manufacturer to store shelves and showrooms — on the back of a truck. And, for the nearly 100,000 people who make their living in the trucking industry, the impact is felt even deeper

Leading the way in this maelstrom is a severe lack of personnel, specifically drivers, a situation that has idled along for years before COVID put it into overdrive. The American Trucking Association estimates the industry needs 80,000 more drivers nationwide, a number that’s expected to double by 2030.

“A very broad base of industry is complaining about workforce issue shortages in general, but this is our party and everybody else is just late to it,” Newton said. “We’ve been here a long time.

“All of the things that happened throughout COVID really just exacerbated the challenge for our industry with people leaving the workforce, accelerated retirements and every other factor that’s out there that has some role or responsibility in the shrinking of engaged employment. The need is so great it’s going to take months if not years to get to where we need to be.”

Trucking companies have found themselves in intense bidding wars for drivers as a result of the shortage. Michael Jernigan, CFO with CalArk, said the situation has pushed carriers into unprecedented territory to stay staffed.

“Multiple pay raises within a 12-month period is one of the things you see in the industry right now,” he said. “We’ve given two pay raises inside of 12 months, one of which was one of our largest in the history of the company.

“It’s just to stay competitive. You have to match the market out here to get the drivers, because drivers can move from company to company, day to day. They can call another carrier anytime, any day and get another job. Sign-on bonuses, referral bonuses… these are the things that we’re having to do.”

Working conditions have also come under scrutiny. Jernigan said the company has put more effort into scheduling to help its 600 drivers get more time at home and less time sleeping in truck-stop parking lots on cross-country runs, hoping to make the job more attractive to more people.

“Giving them more home time is something we’ve done to give them a little more flexibility on their on-road time,” Jernigan said. “The mileage that we get out of a driver is significantly less than it was 10 years ago. We’ve also moved out of just over-the-road, long-haul trucking to include more regional-type services and more dedicated services. Over the last three years, we’ve set up regional opportunities where drivers get to go home sometimes every day, sometimes every other day or third day. We try to run in a way that’s flexible to them.”

Jernigan said such investment and creative thought are worth it, considering the volume of potential freight that’s presently to be had. Taking a more measured approach helps CalArk capitalize on that opportunity in ways traditional logistics might not, even as the company continues to look for ways to attract and hold onto more drivers, not to mention mechanics, which are in equally high demand.

“We’ve got more freight than we can haul,” he said. “We have a lot of freight opportunities there. If we could get the trucks and the drivers, we’d be doing a lot more business.

The industry has also looked for other ways to attract more employees, having leaned on Congress for years to amend driver restrictions. Primarily, the industry has gone after the regulation that drivers must be 21 to drive across state lines, even though 18- to 20-year-olds can drive all they want inside state lines.”

In November, the trucking industry took a major step forward in this effort as its longstanding proposal of a driver apprenticeship program was finally signed into law as part of the federal infrastructure package. The new program, currently under review by the Surface Transportation Board, allows 18- to 20-year-old drivers to cross state lines, initially under the supervision of a more experienced mentor and then solo following a probationary period. Other restrictions apply, including mandatory crash mitigation systems and forward-facing cameras installed on apprentice trucks, limiting the number apprentices on the road and capping speeds at 65 miles per hour.

Newton said she was pleased that most of Arkansas’s congressional delegation was behind the new program, calling it critical for trucking to remain competitive in attracting talent, especially since tapping into nontraditional labor polls, mostly women, has been slow.

“Our industry has supported lowering the age from 21 to 18 for quite some time and is very hopeful that this new pilot program will be a pathway to getting there,” Newton said. “If you look at manufacturing or construction or all of the other technical fields where we are competing for talent, they all have a pathway from education to employment. Our industry doesn’t.

“If you graduate at 18 and you would like to be an over-the-road truck driver, we don’t have a place to hold you until you’re 21. Until we’re able to bridge that gap, we will always be competing for talent at some point later in their professional career.” 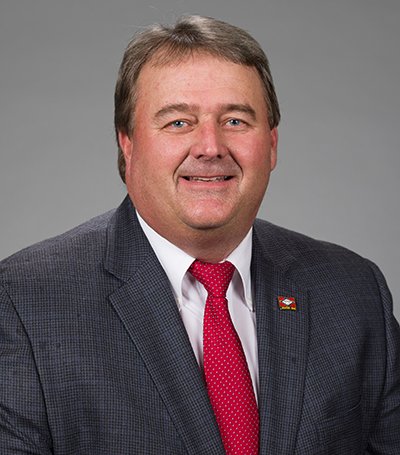 One issue that few in the trucking industry seem to think is as pressing as headlines would have one believe is the march toward electric vehicles. State Sen. Blake Johnson (R-Corning), chairman of the Transportation, Technology & Legislative Affairs Committee, said the recent hubbub about phasing out diesel rigs for electric ones is way ahead of its own argument.

“It’s like the cart and the horse; our electrical grid won’t handle a mass switch in that use,” he said. “You’re not creating energy in that, you’re storing it and using it. It’s a stored energy issue and with batteries as well, so you’ve got a pollution issue, even with the electric vehicle. Those things have to be questioned and addressed if you want to go to a different form of vehicle.

“I think it’s just a shiny penny right now without a lot of thought going into the process. You’re not using alternative energies whenever those cars are charging at night; you’re using baseload energy. Those are issues private industry has to engage in between the energy suppliers and manufacturers of these vehicles.”

Such is not to say that there aren’t serious issues before the state regarding the trucking industry. Johnson said the state’s roads in many areas must be upgraded to handle the additional stress of semi-truck traffic, something he knows firsthand as a Clay County farmer. 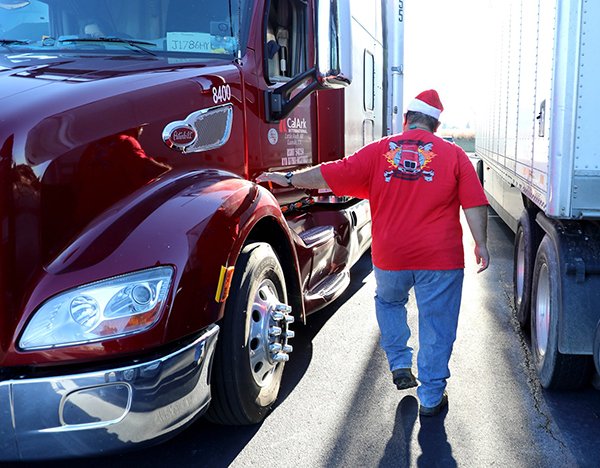 “The money has been spread thin and the farm-to-market roads in the rural commerce corridors have been placed on the back burner,” he said. “I think we have an opportunity with the things that we’ve done with the extension of revenue in the sales tax and stuff in the last few years that will help maintain and improve those roads.

“Also, there’s some infrastructure spending from the feds where their priority has been, from what I have seen, on bridges. There’s a number of bridges in the Delta, not just my area but all of the Delta, that were built back years ago. Those need to be redone and fixed. I think some of that federal money will help with that.” 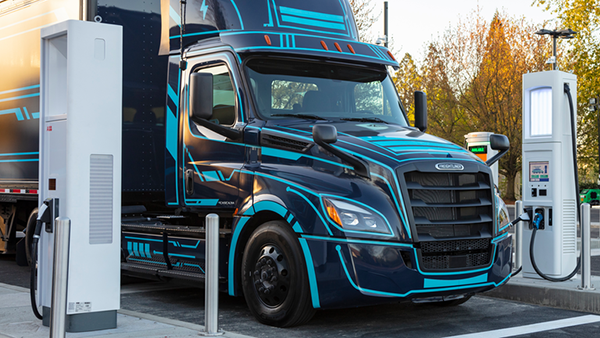 No one expects any of the issues facing the industry to minimize trucking or cause a wholesale migration to rail or other modes of transport. Corporate behemoths such as Walmart, Tyson and J.B. Hunt will see to that. But considering how the vast number of Arkansas operators are small-to-medium outfits — including a healthy percentage of owner-operators — the ongoing health of the industry will be determined by how well “mom and pop” can continue to compete.

“In Arkansas, there’s about 5,000 business entities registered as trucking companies and that would capture everybody, every individual who considers themselves an owner/operator and registers their truck as a business. J.B. Hunt, Walmart and Tyson, these three companies operate maybe 4,000 trucks,” Newton said. “But in looking at the number of companies that are members of our organization, there are far more small trucking companies than there are large ones. It’s very much a diverse small-business industry.’

Newton added that one thing is for certain — if grit and ingenuity count for anything in today’s marketplace, the American trucker has proven more than capable of meeting any challenge, as COVID and numerous emergencies have shown. With a little help from lawmakers, some luck with the supply chain and a weld on the driver pipeline, there’s no telling where the industry in Arkansas can go.

“Our industry is used to operating during disasters,” she said. “If you think about hurricanes or other natural disasters, tornadoes in Arkansas, it’s often part of the scene that the trucks come rolling in with the water and essential supplies that those communities need. It’s not foreign to our industry to continue to operate while other parts of life may stand still.” 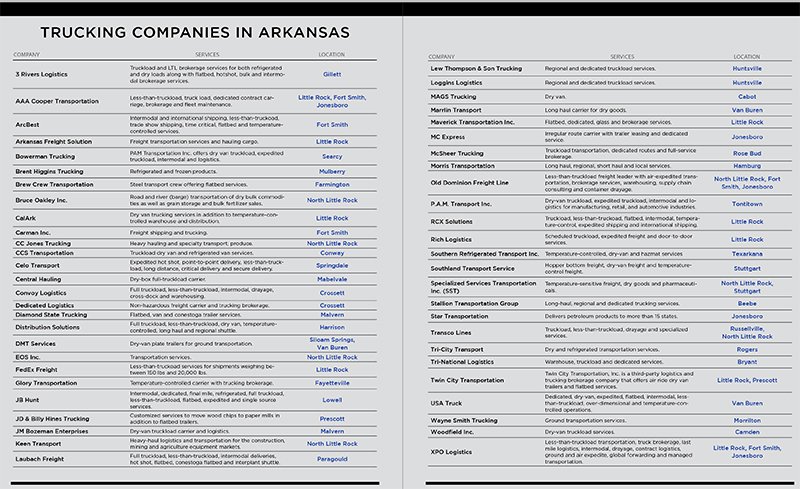