Dozens — including drag performers and transgender Arkansans — stood on the Arkansas State Capitol steps Thursday afternoon and sang “Seasons of Love” to the assembled crowd, an act of defiance against a proposed law approved by a legislative committee just hours earlier.

The performance, organizers said, would be banned under Senate Bill 43, which would restrict drag performances similar to pornography, strip clubs and other sexually explicit content and activities.

The bill defines a “drag performance” as at least one person “exhibit[ing] a gender identity that is different from the performer’s gender assigned at birth using clothing, makeup, or other accessories that are traditionally worn by members of and are meant to exaggerate the gender identity of the performer’s opposite sex” and singing, dancing, lip-syncing or performing in other ways in front of an audience.

The bill asserts that drag “is intended to appeal to the prurient interest,” meaning overtly sexual in nature. It would outlaw such performances or businesses that stage them on public property or in the proximity of minors, and it would restrict these businesses to areas that children do not frequent.

“Under the language of the bill, it seems like there could be no place for a trans person … to be allowed to perform in any way — karaoke, poetry readings, church choir, school plays, Pride events, the Miss Gay America pageant and other forms of artistic and free expression that are protected by the First Amendment,” Dickson said.

Dickson was one of seven people to speak against the bill before the Senate City, County and Local Affairs Committee on Thursday.

Jerry Cox, founder and president of the conservative Family Council, spoke in favor of the bill, which passed unanimously and will return to the full Senate on Monday.

State Sen. Gary Stubblefield (R-Branch), the bill’s sponsor, and other Republican state officials have said Senate Bill 43 would not have the effects its opponents claim it would and is simply meant to protect children.

Stubblefield told the committee that drag performances are “scaring our children and stealing their innocence.”

“To me, protecting the children means ensuring they are able to make it to adulthood,” he said.

Drag artist Athena Sinclair, who led the performance and the pro-LGBTQ rally, was the only drag performer to testify at the committee hearing. She said that drag is not inherently sexual and that she had “more clothes on than most people in this room.”

She said if there was evidence that drag performers were grooming children or behaving sexually in front of them, she would support action against it, but she hasn’t seen such proof.

“This bill is going to completely destroy what we do as an art form,” she said.

Jason Bailey and Ally Tomlinson, two witnesses against the bill, mentioned that the restaurant chain Hooters is considered a family-oriented business, even though its waitresses wear sexually suggestive clothing.

“If this were about lewd behavior, Hooters would be shut down,” Bailey said.

The language in the bill pertaining to clothing means “transgender people fit that part of the definition more clearly than non-trans drag performers do,” said Richelle Brittain, a former member of the Arkansas Transgender Equality Coalition.

Supporters of the bill have said the courts would decide what is “prurient,” a term Brittain knows well as an attorney. However, she said, the language of the bill would put that decision in the hands of police and prosecutors rather than courts.

Tomlinson said parents should be able to choose what is appropriate for their children. She added that Gov. Sarah Huckabee Sanders has emphasized personal responsibility and parental empowerment regarding COVID-19 protection measures and where children attend school.

“We’ve never had any other discussions about the innocence of children until it comes to the LGBTQ community, so that’s the reason why your constituents are coming to you and discussing this with you,” Tomlinson said. “They’re really trying to convince you to also represent them.”

At the rally, Hart said parents have thanked him for “being visible” to their children as a drag performer.

Terri Goad of Beebe said she believes “drag is not dangerous.” She brought her children, 13-year-old Sara and 9-year-old London, to the rally.

“I think kids have as much of a right to make an opinion about people as we do, and that’s why they’re here,” Goad said.

Rally-goers carried signs with slogans, including “Transphobia is a sin,” “Respect our existence or expect our resistance,” and “Drag is art, hate is ugly.”

At one point the crowd chanted “We belong” and “We will not be erased.”

Senate Minority Leader Greg Leding (D-Fayetteville) was at both the committee hearing and the rally. He and other legislative Democrats said last week that they will fight bills they oppose despite not having the votes to overpower them.

“Even though there aren’t enough of us yet, there are lawmakers in this building who see you, who hear you, who care about you, who are working for you and fighting for you, and we’re not going to stop,” Leding said at the rally.

The speakers encouraged the crowd to support pro-LGBTQ candidates and consider running for office. Judson Scanlon, who ran for a House seat in North Little Rock last year and lost, said running for office was incredibly difficult but necessary. As a 60-year-old member of the LGBTQ community and an Arkansas native, Scanlon said it is tiring to be repeatedly targeted by people and entities with power.

“[The bill] is going to pass, and we’re going to be inflicted by the pain and the trauma of that passage,” Scanlon said. “We have got to be in a position where we can take that pain and that trauma and use it, because that’s the only way they’re going to stop.”

Scanlon received some of the most applause at the rally. So did Marie Maynard O’Connell, a Presbyterian pastor and a mother to a transgender child.

“The very beginning of the book of Genesis [says] people are made in God’s image,” O’Connell said. “Trans kids are in God’s image… When there is legislation putting you down, they are putting down God.”

Dakota Blackmon spoke against the bill in committee and brought his own perspective as a Christian.

“Our brothers and sisters, our siblings in the trans community do not deserve to have their very existence, their expression of their identity, made illegal,” Blackmon said.

State Rep. Mary Bentley (R-Perryville) is the House sponsor of Senate Bill 43 and the primary sponsor of House Bill 1156, which would restrict schoolchildren’s access to bathrooms and changing areas based on their gender assigned at birth. The House Education Committee will take up the bill next week.

A bill in 2017 would have restricted the use of public restrooms to a person’s gender assigned at birth. Similar legislation in North Carolina led to protests and boycotts the previous year, so Arkansas Gov. Asa Hutchinson suggested the Legislature not debate the bill.

Bentley also sponsored a 2021 bill that would have required public school employees to address students only by the name and sex designated on the student’s birth certificate. 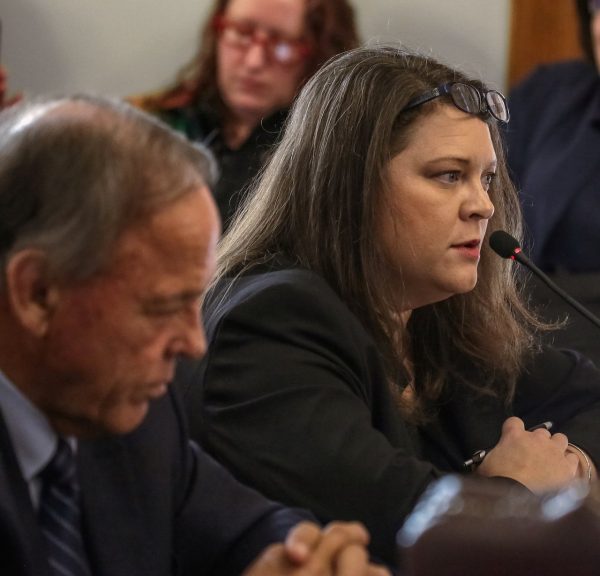 In 2021, Bentley sponsored what is now the Save Adolescents From Experimentation (SAFE) Act, which prohibits physicians from providing “gender transition” treatments like hormones, puberty blockers and surgeries to those under age 18. The Legislature overrode Hutchinson’s veto to pass the law.

Four transgender Arkansas minors, their families, and two physicians who provide gender-affirming care to youth challenged the SAFE Act in court. U.S. District Judge James Moody heard the trial in late 2022 and has yet to issue a verdict.

Moody previously enjoined enforcement of the law in July 2021. A panel from the 8th U.S. Circuit Court of Appeals upheld the injunction, and the full court later refused to rehear the ruling.

The trial was the first in the U.S. over a ban on gender-affirming health care for transgender youth.

Arkansas Advocate is part of States Newsroom, a network of news bureaus supported by grants and a coalition of donors as a 501c(3) public charity. Arkansas Advocate maintains editorial independence.